This hockey season I have been attempting to watch as much Red Wings hockey as I can. Overall I have only missed three games out of our 17. It has been fun to see our young guys developing and playing gritty hockey.

Averaging almost an entire goal less per game is an eye opening stat. Steve Yzerman plays a big role in this change. Signing both Merrill and Stecher while trading for Staal and picking up Ojoos off waivers from Anaheim. These four guys replaced a brutal D-Line of Eriksson, Daley, Green, Cholowski. Big Upgrades. Not to mention Steve Yzerman’s first draft pick as our GM; Mo Sieder had 24 points in 31 games before being sidelined with an injury.

We may be just about last in the league, but we have been playing better. Dare I say it? Okay… The wings have played six straight games of good hockey. I am going out on a limb and saying we haven’t put a stretch like that together in the last three seasons. The Wings have outshot their opponents in their last five and we are 2-2-1 in this stretch.

One thing that is abysmal, pathetic, asinine, the Red Wings power play. We are a whopping 4 for 53, 7.55%. Compared to the league average of 20.98, over 13% below, pathetic. We are 0-26 in our last nine games since losing Tyler Bertuzzi to injury. Bert currently has three of our four power play goals.

Also, I saw this graphic the other day and thought the fans would like to see it. The Placeholder ended up being the New York Rangers, putting them on the top at +14. While the Wings are a measly -8. 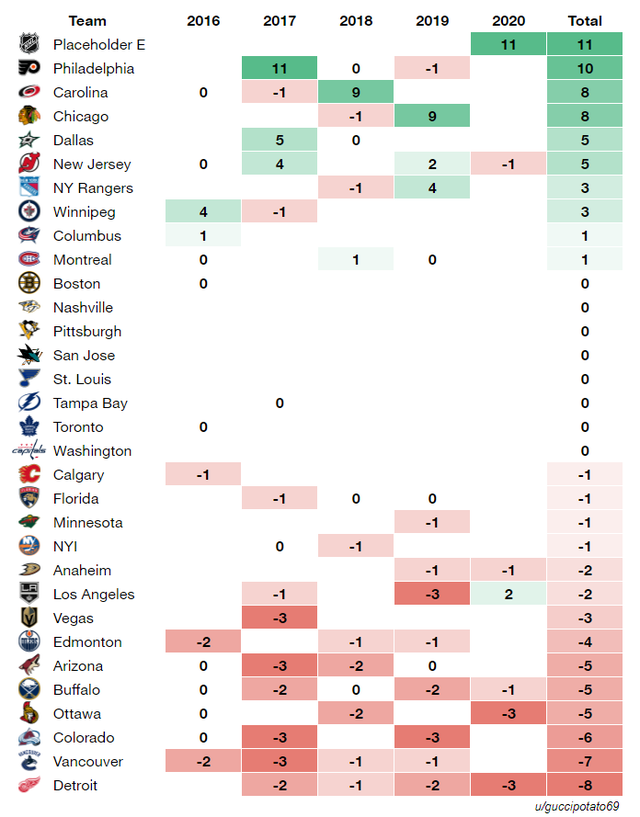 Either way, I am having fun watching the Wings play this season and will keep y’all updated on how they’re doing.