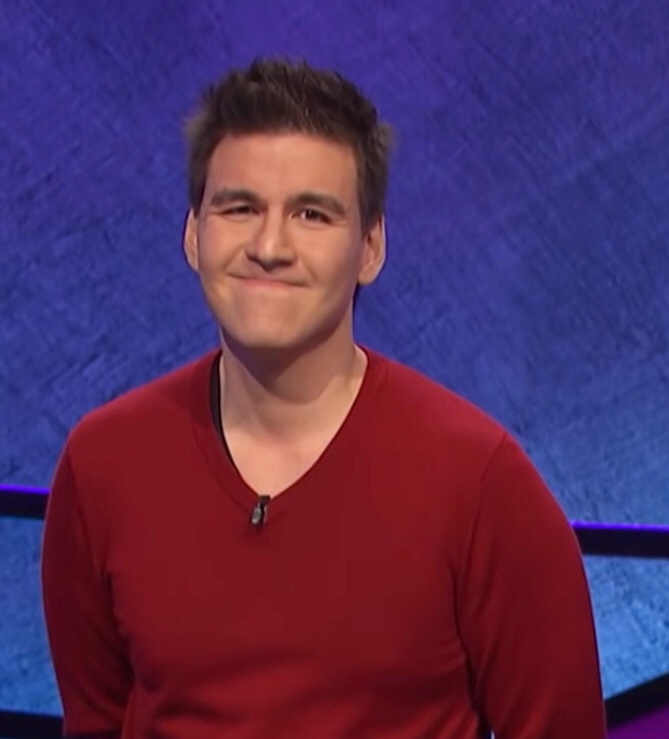 Here we go: James the robot is trying to extend his steak to what, 20 straight days. We will be here Live!

James actually missed a question. He lost the First row of questions. He goes after the higher priced questions first and I’ve never seen such a thing on the show and I watch every night.

I still think James is cheating. The stuff he pulls is out of this world. Anyways he looks flustered right now. A lot of pressure to keep this steak going. I know Alex Tribec is sick and it’s getting serious but if James keeps this up does he just replace Alex if anything bad happens to him? Makes ya think.

And we’re back. Half the board to go.

James is getting hot. Just stole a question from poor Jessica. Seems like Josh is donzo. Moment might be too big. James gets another daily double. He’s going to bet everything. Anddddd

Whoa another wrong answer by James.

I just beat James on a question about the X games, suck it, James.

I mean come on. Talk about a game being over at half time.

Commercial thoughts: James really pulled away during that last half of the first half. Just starting dominating the clicker and wasn’t letting the other two even attempt a question. I’m really hoping he bets everting at the end and losses. Would be a bad way to go out but I think he is the only person who can beat him.

And we’re back again. Jessica is up first.

Learning something new everyday, second round questions are worth double.

Come on Jessica, need a better effort. She owes the show 1400 bucks right now. Not great.

Tribec “nice Jessica your out of the hole”

James is on his third daily double and now I know the show is either helping him cheat or he’s got a guy on the inside. This is getting out of hand. He’s yelling the answer before Alex finishes the question. This is so boring now I’m watching the battle for 2nd place.

Commercial thoughts: idk what to think. We’re at must watch Tv now. Every night until he losses. He probably won’t lost but I need to see it happen. He’s making a fun game not very fun anymore!!

And we’re back for final jeopardy.

See ya tomorrow James. Maybe I just heard there is a teachers tournament. So we will see. Unbelievable what this guy is doing. Cheating or not.

One thought on “LIVE! JEOPARDY LIVE”