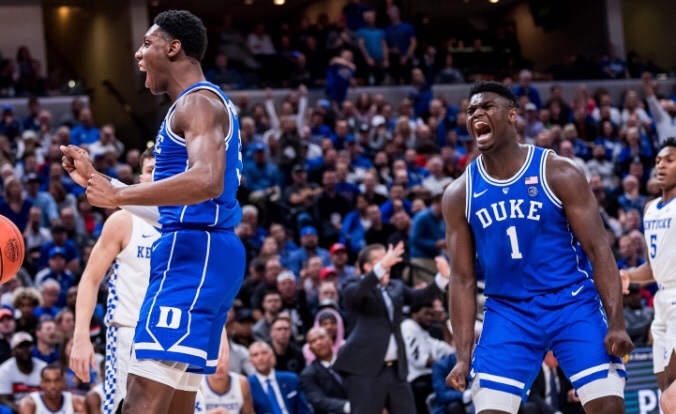 In basketball, especially the National Basketball Association (NBA), people use the word “Tweener” to describe players who don’t have a position because of their size. Point Guards are usually from the 5 foot 8 range up to 6 foot 3, some can be taller but thats the average size of an NBA point guard. The Shooting guard is anywhere from 6 foot 3 to 6 foot 7 on average. A small forward is 6 foot 7 to 6 foot 8, hence the small forward. Than the PF are usually from 6 foot 9 to 6 foot 10 for some guys. Then usually the centers are the biggest guys on the team. So, we have our boy Zion, who is a FREAK athlete. He can jump out of the gym and is very strong for his age. But the dude is 6 foot 7 and weighs 285 pounds…….. 285…. 285. In what world can a SF weigh 285 pounds? The kid is too heavy to keep up with any NBA player in the near future. For an example, Lebron is 6’8 250 pounds of pure muscle and can dribble and can shoot and can move. I don’t know why people aren’t taking about how bad of a shooter Zion is. he cant make a contested 3 and sometimes I worry he’s going to break the back board when he shoots free throws. So, again Zion weighs 285 pounds and is in between a Small Forward and a Power Forward. If he plays a 3 in the NBA every opposing player will just run around him because he’s too slow. If he plays the 4 vs an NBA player, he will get bullied because hes only 6 foot 7 maybe 6 foot 8.

All in all, he is a solid player, who is a great dunker. That might be the only way he scores points though. Just remember Anthony Bennet was great in College and he went number 1 in the draft to the Cavs.

RJ Barret will be a super star in the NBA and is the best player on this team. Cam Reddish is an NBA player and moves like an NBA player.

Zion is just way to heavy to be affective in the NBA. Lebron was a much better shooter out of high school. And Lebron didnt weigh 285 pounds. As i write this, Duke is a battle with Florida State and this brings up a good point that if Duke struggles with these tough road games, imagine the pressure of a NCAA tournament game with players with no experience.

You cant win championships with all Freshmen and Florida State is proving that. Kentucky has only done it once.

P.S Duke is overrated and has no chance vs a real team like Michigan.

3 thoughts on “Zion Williamson is overrated and will be an NBA BUST!!”